TIPS FOR NAVIGATION AND ORIENTATION OF PYRAMIDS 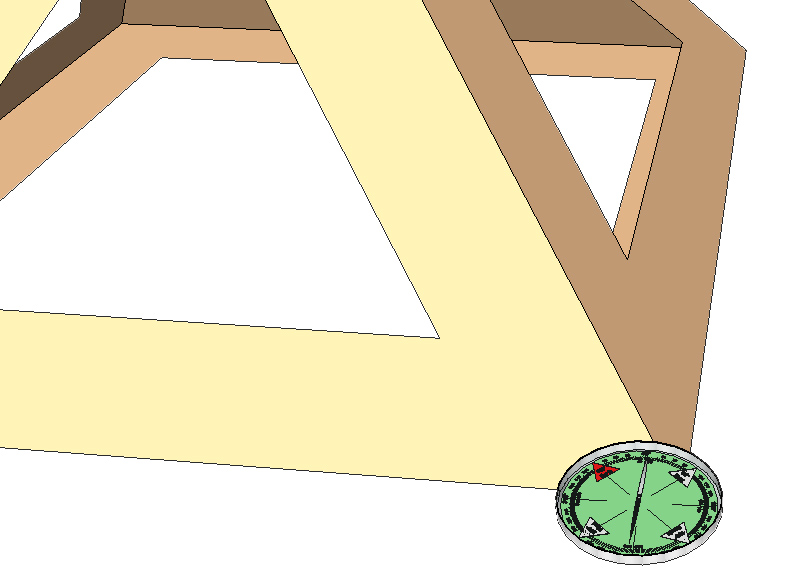 There is a zero point, and you should never leave the compass inside the pyramid. The pyramidal effect liberates us from many pests and protects us from almost all of them because it produces a constant Biomagnetic Pair therapy at 0.5 Gauss. We function correctly when our particles, atoms, molecules, cells and organs have their magnetic fields balanced. Every functional imbalance of any etiology has a physical basis and is magnetic. In a magnetically balanced medium, viruses can hardly attack, oxidation is difficult, and decay inhibited. And we have all the advantages of the pyramidal effect. But how do the compass work? Well, it works because it's unbalanced. One tip of the needle is magnetized, and the other is not.

It seems paradoxical, but for us to use the pyramidal effect and produce that beautiful balance, we have to use an unbalanced element like the compass. So the zero point is the most important thing that a pyramidologist should know, the compass should never be left inside, below, or near a pyramid. It has to remain outside the pyramidal field, which can cover up to a length of the base. If I live in a pyramid house, I can't have compasses inside, because in a short time it will be useless, it will make a magnetic pareo. But we need it "sick," unbalanced, to work for us. If you sleep in a Pyramidbed, you can't leave it nearby, and it's even convenient to store it in another room.

Use dry and needle compasses, preferably. Those of immersion in liquid, usually fail when they have an air bubble. Let's see the compasses.

MEDIUM QUALITY DRY COMPASS
This model is dry with needle, but the quality of these keychain gadgets is usually poor. They work as long as they are on one piece, and often, a squeeze in the pocket is enough to have all the loose parts inside. If you don't have a better one, these compasses are reliable. They can cost between three to ten euros at gas stations and other non-specialized stores, but keep them in mind only to get the job done.

EXCELLENT DRY COMPASS
We recommend this one, it has a firm shell, it's dry, doesn't break easily, and the magnetization of the needle won't contrapolate. They are made to serve well and last long. Of all the ones we have used, these are the best, most reliable and resistant. As they are large, it allows you to see the line that indicates the degree without having to use magnifying glasses as with small ones. However, it requires some practice. Orienting a Pyramidbed for the first time may take a minute, but with practice, we do it in five seconds. Of course, to orient a Pyramidhouse, we aren't going to use a compass, but a topographic station, a surveyor with a theodolite. But orienting small pyramids or our Pyramidbed only requires a compass that works well, reliable and not easy to break.

QUALITY COMPASS - LIQUID
I have nothing to do with the Silva brand, but they happen to be very good. It's used for navigation to work on maps, and although it's in a liquid medium, it's the only exception in liquid, even recommended for working with pyramids. They have a model with a small level, allowing to work more accurately, with a minor error of half a degree. To orient the Pyramidbed is also advantageous. Being in liquid will also hold more inside a pyramid, but still recommended to keep it in another room.

The price of these can be between 15 and 40 Euros; it depends on the model and where you buy it. But it's better to spend on the security that on something that for cheap can be a waste of money or could be worse if you have to use it to navigate by land or sea.

If you want to move to a higher quality, you will have to think about spending more than one hundred euros. I have some of those very special, Dutch and German, with a bronze body, dry, on a stem, with level and other stuff, but it's not necessary to spin so fine. Any of these three works with pyramids.

NEEDLE LIQUID COMPASS - LITTLE RECOMMENDED
These needle compasses in a liquid are not very good in general unless they are specialized brands, such as for map navigation or military manufacturing. If they have a bubble, they are no longer reliable for point navigation nor to orient our pyramids. A small bubble will cause the needle (or worse when it's a disc) not to indicate correctly, having deviations from five to 15º, depending on the size of the bubble. Even if they don't have a bubble, I don't know why they don't work. Some had to be destroyed, as we do with every compass that does not indicate correctly. I had to throw away a batch of twenty that I bought - many years ago -. None marked well. I checked them using four very good compasses from other brands. It's curious that the Chinese, the oldest users of compasses (and I have one of the year 1300 approx.), manufactured millions of bad compasses. But of course, not all are bad, some are very good, you can buy them in Chinese bazaars from five to twenty euros, with diverse quality. In summary, these in liquid can serve, but they are not reliable. Not recommended to work with pyramids, and you don't want them to navigate in the desert. But I would use them in the jungle, where there are cassiterite, uranium and ferromagnetics that drive compasses crazy. These support better the external magnetic influence, and they are slow, they would last longer inside a pyramid. But if you are not going to the jungle, discard this model.

DISK COMPASS - DO NOT SERVE
With "Needle" are always better because at least they do work almost always, as opposed to disk. Those with a disc, one part is magnetized and the other is not, but it happens that when there is more contact between the ends, the magnetism ends up going to the other half of the disc, not working anymore, they practically DO NOT SERVE at all. They are made to last little.

In the needle, it's more difficult for that to happen, because the field has another shape.

SPHERICAL COMPASS - DOES NOT SERVE
These compasses for keychains, also larger to put in cars, are a box with liquid where a sphere swims and indicates the cardinal points. But they have practically no use, more than knowing - more or less - where you are going. They are not used to work with pyramids. I would only use these compasses if I have to go by boat or plane to the poles, in which case I will have to take into account the declination, but they would allow me to enter the hollow poles of the Earth without losing my way. If you're not interested in that topic, because your thing is to orient pyramids, also discard this model.

b) The APP magnetic sensors to detect fields, in microteslas or miligauss, usually work better than the compasses (as long as you remove the case if it has a magnet, sometimes these are "invisible" in the clip). I use these APPs to make checks, but never better than a compass, without the phone.

c) Some APP compasses work only with a data connection; they will mark the geographical North, not the magnetic one. These are not useful for anything practical, because in the field, if there is no satellite connection, they won't work and orient pyramids with them, it would only be more or less successful if you know at what point from the magnetic isogonal of the planet you are.

Tips: Find one compass of the first three examples (especially the second and third ones.)