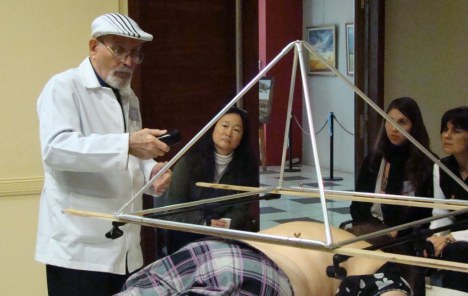 Physicians friends, therapists, athletes, patients and the general public, in Alicante, December 13, 2005, Cuban physician Dr. Ulises Sosa Salinas received an announcement from the National Scientific Council of Natural and Traditional Medicine of Habana for the acceptance of pyramid therapy, recommending this for all official health agencies, under the guidelines established by this prestigious Orthopedist, whose previous research of five years and then a ten-year work on pyramid applications in primary care and orthopedic clinics, has been previously endorsed by a dozen general hospitals, teachers, civilians and military.

These settlements suppose strong support to pyramid therapy since our scientific team begins to incorporate Spanish doctors and therapists, some of whom are learning this subject in courses in Cuba, in pyramid mode (interior) and Antipyramid (under the plane of the base). Pyramidotherapy and the preventive use of pyramids to sleep inside are causing a significant global impact because we already have colleagues (pyramidologists, doctors and therapists) in Chile, Argentina, Brazil, Mexico, Canada, Germany, Belgium, Romania and Russia.

In addition, his studies have been attended and completed by dozens of physicians, physicists, chemists, veterinarians, agricultural engineers and beekeepers, with unprecedented successes in many plant, animal and human diseases, some of which are considered "incurable" by allopathic medicine.

Results highlighted in rheumatic diseases in general with incredible corrections, (of which I can give faith for own experience) fibromyalgia, multiple sclerosis, stomatological, asthma, sinusitis, migraines, sleep disorders, hypertension, bacterial infections, etc. So the Scientific Council has recommended extending the research to all other pathologies that could be treatable with pyramids. In short, the use of pyramids as a preventive to these and other diseases will be the most used modality in the various groups of people who want to stay healthy.

Other important matters are the successes achieved by combined therapy of pyramids with peloids (curative muds), magnetotherapy, mechanical rehabilitation, reflexology, digitopunture, Bach Flowers, etc., in no case having been found therapeutic incompatibilities, with the exception for the consumption of corticosteroids and steroids, which seem to retard the pyramidal-therapeutic processes.

It's because the pyramid effects - easily verifiable by any person - are not destructive and come from quantum corrections and molecular restructuring of matter.

It may not be a "panacea," but the results obtained so far show that we are facing the closest thing to it. Psychical and or psychological effects, based on the myorelaxant effect, endocrine regulation and other biological corrections, are no less important for therapists who manage to accelerate cathartic processes with greater tranquillity in patients.

The next investigative step will be on patients with cancer since although we are optimistic according to what we know about the causes of the effects, we don't yet have any case treated with pyramids.

I can't divulge the existing documentation for now, since we have developed a thick book, whose material can't be published before the publisher does. In this book, not only are the technical explanations from the physical point of view, from the researches of the 1st and 2nd Osiris Scientific Group, but also the statistical protocol developed by the Cuban professionals and all the documentation that I already have the copies Legalized.

>>> See some of the most outstanding personalities of pyramidology in Cuba

CENAMENT. The Scientific Council of the National Center for Natural and Traditional Medicine considers the clinical evidence presented on the therapeutic value of the PYRAMIDAL EFFECT in a wide range of orthopedic diseases to be valid. Although it recommends continuing the development of research to expand the proves and provide new evidence in Orthopedics and other medical specialties, the research results show capacity as Anti-inflammatory, Analgesic, Bacteriostatic, Muscle Relaxant and Sedative. Therefore, in use of the faculties that are inherent to it, This Scientific Council unanimously approves the use of the PYRAMIDAL EFFECT in those pathologies where it is justified as treatment of some of the symptoms and signs mentioned above and recommends generalizing this therapy in the National Health System. To make this result known to all potentially interested parties and to publish this opinion on the Natural and Traditional Medicine Website. Given in the City of Havana, at seven days of December 2005. Year of the Bolivarian Alternative for the Americas. "Dr. Leoncio Padrón Cáceres, Chairman of the Scientific Council. Signature Doctor and seal of the Ministry of Health of The Republic of Cuba. 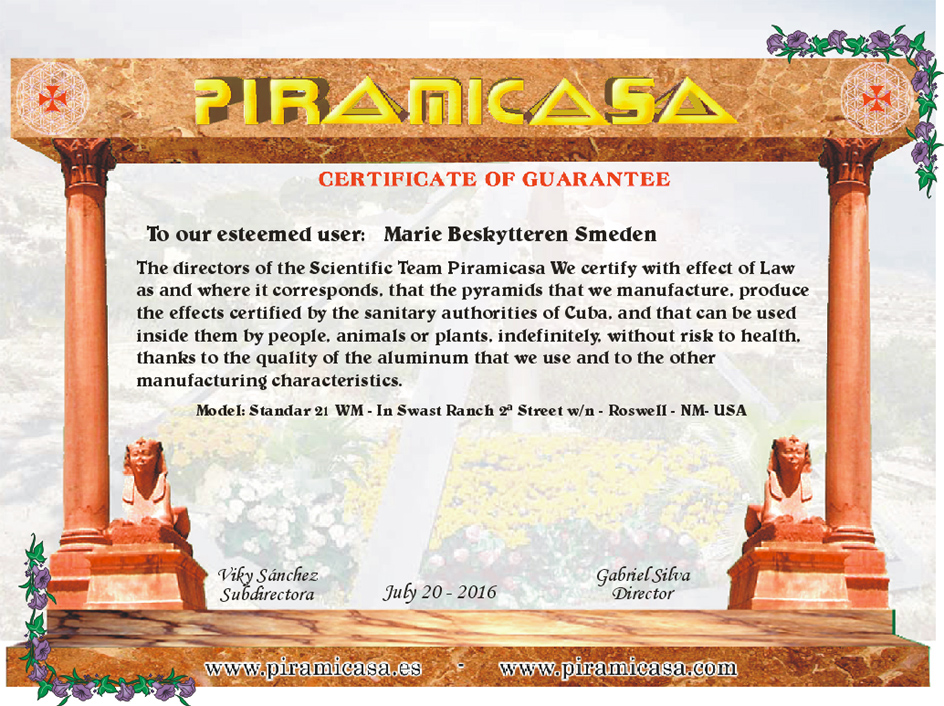 Some endorsements before the most important "CENAMENT" seen above. There are more guarantees, but it is enough for the false skeptics to be silent, and the real skeptics begin to experiment.

We wish to encourage doctors, therapists and researchers from around the world to take Pyramids seriously and to participate in this scientific revolution that Humanity needs. 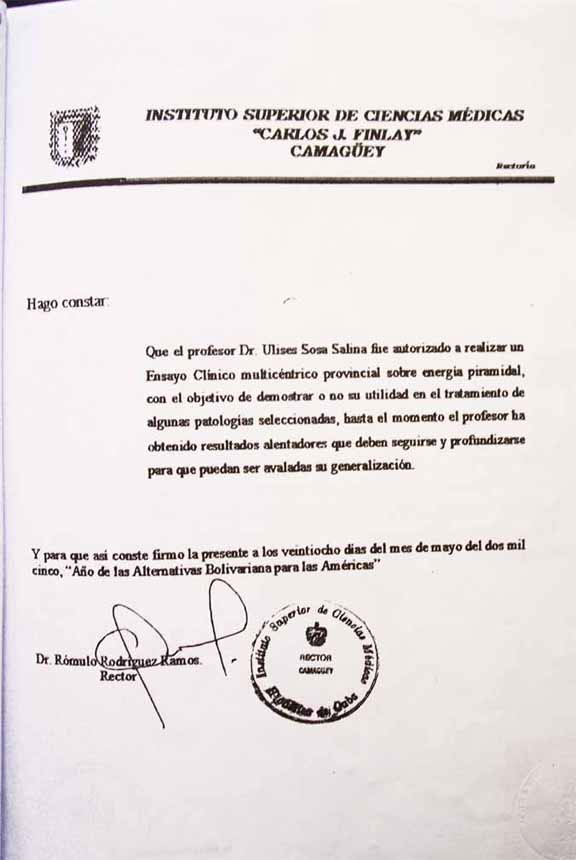