PRESENTATION OF THE DIRECTOR GABRIEL SILVA 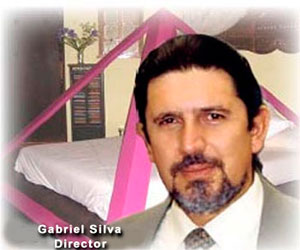 Hello everyone, and welcome to Piramicasa: From the time I was six years old, I began to feel passionate about pyramids, and I knew that they weren't tombs and that they were not only in Egypt.

Also, thanks to my father, who was an engineer, I was able to understand that the pharaohs couldn't make the construction of pyramids, or at least not with the technology that they supposed to have. Until before I turned 14, theories about pyramids and pyramidal energy flooded my life, and I understood that none was enough. I had to go to practice, and I started to make pyramids and do experiments. One hundred pyramids and more than five hundred experiments in ten years. Although I had other vocational interests, also linked to scientific research, I was defined as a Pyramidologist.

At 24, already in 1984, I had a rheumatic outbreak of galloping progress, and I left the trance by making the first pyramid for me. I had cured cats, canaries, bees and plants of many different species, but I had to try myself because medicine gave me no alternative to the condemnation of living the rest of my life in a wheelchair. In a few months, my health and my life returned to normal. I then undertook an unprecedented investigation, realizing the extraordinary importance of what was discovered and proven. Two physicists, a mathematician, several biologists and doctors involved, resulted in having in my hands a knowledge impossible to value economically. The costs were high, but the results far exceeded them.

However, I didn't know how to get these wonders known, which I describe in great detail in my books. So I searched in vain, someone to make pyramids to deliver to Humanity the product of this research, whether houses, beds or other functional pyramidal structures. In 2000 someone put me in touch with Dr. Ulises Sosa Salinas, and I learned that Cuban doctors had been treating for several years with pyramids. But in 2001, thanks to a conversation with this eminent doctor, I had to accept the idea that no one had put so much effort or lifetime dedication into the research, nor all his economic resources of a lifetime, so I couldn't pretend that another person will create Piramicasa with the same passion. The only way was to change all my professional activity, set aside all my talents in other activities to start working with Piramicasa. A formidable challenge for anyone with more than forty years and no commercial experience outside of mining, exploration, arts (singing and painting) and psychotherapy. I only had the unconditional support of my wife Viky Sánchez, and we decided to create Piramicasa. Then a few friends who share this responsibility on the pyramid theme joined. However, given the difficulties in making everyone change their homes, we had to get pyramidal energy to any home, and in fact, we had been sleeping in a pyramid for two years, so we set out to improve the Pyramidbed product. Inventing the pyramidal bed was a great success, but it was necessary to guarantee the absence of undesirable effects produced by regular aluminum and any ferromagnetic or diamagnetic material. We obtained after months of searching, an aluminum formulated and extruded exclusively according to our guidelines, and we began to offer it. Making wooden pyramids was less ecological and of limited duration, somewhat inconsistent with our philosophy. Those of high purity aluminum have innumerable advantages and last forever.

Today, are thousands of friends, users, collaborators and scientists interested in continuing to grow Piramicasa. It's enough to sleep a few weeks in a Pyramidbed, treat a serious infection or heal a severe sprain with a pyramid in just two days, to verify that I'm not exaggerating about the importance of what we do. Today we manufacture Perfect Pyramids that we install or ship worldwide. For us, bacteria and rheumatic ailments have ceased to be a concern.

Thanks to all who support us in this stage of growth, my gratitude and from our entire team, to those who trust in Piramicasa, because thanks to them, even a few thousand in 2014, is that Pyramidology is known around the world.

UPDATE: In 2019 are more than one hundred countries where Pyramidology is known, and therapists, doctors and private users continue to increase.