MAGNETIC NORTH TO ORIENT A PYRAMID, USE A COMPASS

INDICATIONS TO DEFINE THE LOCATION FOR A PYRAMIDBED®

Where a pyramid can't function for magnetic reasons, NO ONE should stay or sleep. For those who don't use pyramids, this test can end diseases caused by geobiological factors.

If you have doubts, don't hesitate to contact us. You indicate the exact address to us (to see it in the maps of isogonic and others) and the measurements of the room (length and width), and we do the checking for you. However, the test with the compass must be done by yourself, since the geopathic and local magnetic anomalies can't be seen in the maps.

The first thing we must do is make sure that the Pyramidbed® (square base) fits in the bedroom, so we need to know its length, width, and orientation concerning the magnetic North. Also, keep in mind that you can sleep head to the north (optimal), south (good) or east (good), but you should never sleep with the head to the west.

Assuming the worst case, a 45º deviation of the room, to the magnetic north, the necessary space will be 3.2 x 3.2 meters for our Hercules model. In an optimal orientation, it will occupy 2.4 x 2.4 meters.

But first of all, it's convenient to do a small geobiological test, which any person can perform with a dry compass. It consists of making sure there are no important magnetic anomalies.

If the compass marks the North in all the points of the room (logically forming parallel lines in the reading), then there is no inconvenience whatsoever. Some small deviations are reasonable, but a situation shown below is not.

You can "walk" around the room as indicated by the arrows or in any order, but methodically, reading at least nine points. An expert in the use of compass doesn't need anything else, but novices can use chalk to mark on the floor or make a sketch.

HOW TO USE THE COMPASS

Always on the hand, never on the floor or on furniture that may have screws, nails or other metallic parts. It is held at the waist, chest or near the face, but avoiding buckles, collars or other metals. A minimum distance of half a meter to the walls and floor.

ALWAYS the physical compass is more reliable, the ones you can buy at any store. The best are those of Scion dry, if they have liquid, "without bubbles." DON'T TRUST the compass of the mobiles, which go with the GPS and not to the Magnetic North. 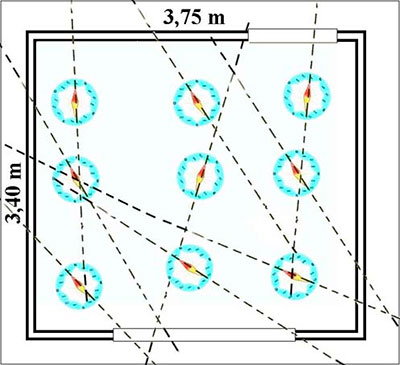 If instead - as in this other image - we have a mess of readings where the compass marks different North in each place, we have a picture of magnetic anomalies "geopathic" that is: "place of the earth that produces diseases." In 1300 cases (until June 2014), we have only encountered three of these geopathic. Two of them solved by installing the Pyramidbed in another room because, in general, it's almost impossible for a pyramid to work under these conditions. In the other case, the house was affected by intense geopaties, and we couldn't assemble the pyramid there. Its occupants had to abandon the house since upon discovering this problem, the history of the place was ascertained: All the people who have lived in that place have fallen ill in a matter of months.

So, you SHOULD NOT LIVE or at least you should not sleep in places where a compass gives abnormal readings. The majority correspond to nearby groundwater, to the metal structures of the building (which reinforce natural geopaties, etc.), or a combination of both. In other cases, the problem is combined with knots of the Hartmann and Curry networks, although these, if they are not very intense, don't usually affect the function of the pyramid.

There are exceptions when, for example, the compass is only altered at one spot in the room, close to a wall or a beam or a metal mass such as a radiant stove, in which case we will see if this anomaly is only at that spot. In this case, the pyramid will work, as long as it's not on that spot, or if the anomaly is very small. Once we are sure that we can install it without risk of intense geopaties, we verify that the pyramid fits, and we define the best size, design according to that and the measurements of the users (height and weight).

LET'S SEE SOME EXAMPLES OF BEDROOMS, THEIR MEASURES, AND ORIENTATION

It's rare to find a bedroom with one of its walls -especially the head of the bed- exactly to the North. But if the Pyramidbed fits, the body will thank with health, when sleeps correctly oriented, regardless of the distribution of the environment, but also the aesthetic is innovative, and in many cases, excludes the user from the "square" mentality, with psychological benefit added.

This drawing is a typical case of orientation in apartment buildings. Still, there are many houses where orientation is not taken into account when building, or the planners drew the streets without taking into account this important factor.

Once, a client wanted a pyramid slightly larger than the standard, but given the orientation, it was impossible. Once confirmed with no geopaties in the room and asked the height of the users, it turns out that he is only 1.63 m and she 1.55 m. So they didn't need a standard size pyramid, and 1915 mm resulted enough.

The side of the PYRAMIDBED must always be 25 centimetres larger than the user's height, but we try in all cases to make the difference a little bigger for more comfort.

Another exemplary case, a pyramid of 2.1 meters doesn't fit, but if the user's height is less than 1.75 m, it's possible to install one of two meters. Without these simple conditions of orientation, we cannot expect a pyramid to work. We have had orders from customers who didn't want the Pyramidbed for its effects, but pure aesthetics. We refuse to install a Pyramidbed where it can't function properly.

In any case, do not hesitate to contact us if you have any questions.

>>> WHAT COMPASS YOU NEED TO USE