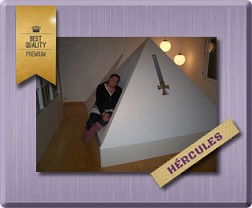 The antirheumatic and antisclerotic effects of Pyramids are due to known physical causes, such as the elimination of free radicals, molecular restructuring and surfactant activation, quantum recomposition at the atomic level, etc. Using the Earth's magnetic field produces a recomposition of the Biomagnetic Pair but without adverse effects. The Pyramid effect doesn't depend on subjective factors, never fail in any case of rheumatism, because this effect is strictly physical, regardless of the chemical and or biological conditions of the body or Psychological conditions of the patient, which will only influence as more or less recovery time.

Patients with a few years of chronicity, recover or at least can verify the curative process in less than one year with pyramids as our Pyramidbed.

Most severe cases, both acute and chronic (many years with progressive symptoms of rheumatism), require a model four times more powerful, 2.40 m by side, with closed faces and sliding doors, comfortable, and the benefits are many more than the simple treatment of rheumatism. The Pyramidbed Hercules.

Pyramids are a natural magnetotherapy, producing equilibrium in the Biomagnetic Pair using only the terrestrial magnetic field, without the risks of the artificial magnetotherapy. However, there are some (preventive) contraindications in the use of antipyramid (the field that the pyramid forms under its base) as explained in the book "Revolución Terapéutica de las Pirámides."

About 167 rheumatic modalities treated with pyramids until 2012, and the results were favourable in one hundred percent of the cases, which are several thousand. Among them, mainly rheumatoid arthritis, deforming osteoarthritis, thousands of cases of spondylitis, several fibromyalgias and some cases of multiple sclerosis, although the symptomatology is different, the etiology is similar, since the physical causes are the same - degeneration of the molecular order.

The pioneer in the cure of multiple sclerosis with several complications of rheumatic character is a Cuban patient who suffered multiple sclerosis combined with bursitis, osteomyelitis and spondylitis. He cured his multiple sclerosis, and his severe rheumatism, using a poor quality aluminum pyramid (with a lot of iron), which is not good to sleep in, so he performed a therapy of three or four daily sessions of 45 minutes. See his testimony:

Thousands of people successfully treated with no case of failure, because "the unknown etiology" is the same for all instances - molecular deformation of liquids by various causes - as well there are usually the same complications in all of them, meaning, interference of viruses and bacteria that find a promising situation in the molecular chaos and the consequent deficiencies caused in the cellular membranes and micro lesions of the synovial membranes. Sleeping within a proper structural pyramid is the best preventive for rheumatism.

For people with rheumatism already stated there are two non-exclusive alternatives:

A) Overnight inside a pyramid.

B) Combined treatment of overnight in a pyramid with sessions of antipyramid during the day, in local or general applications, according to the areas most affected by the disease. Especially recommended in painful cases, since the pyramid itself has a soft analgesic effect. The antipyramid is more potent in this and other aspects (see differences between pyramid and antipyramid).

As a basic rule, all antipyramid treatments most be performed with intervals of two hours between the end of one application and the beginning of the next. Each application varies according to medical criteria but with a maximum of fifty minutes.

Fifty minutes is the maximum reached in prolongation of the colloidal flocculation cycle in the cytoplasm of various samples within a functional pyramid, so prolonging the exposure more than that time implies altering cellular cycles of which we still don't know much. Besides, the thousands of cases treated with pyramids in various care centers in Cuba by Dr. Ulises Sosa Salinas and his disciples have revealed - in statistical analysis - that the optimal average effects are subjected to these cycles. Therefore, in most cases, doctors and therapists will recommend between 20 and 30 minutes of antipyramid exposure, at least for rheumatic conditions. Pyramidal energy is not a palliative for rheumatism; it is curative; depending on the cases, it may take more or less time to achieve total healing.

One of the precious advantages of pyramid therapy is that continual exposure to the interior (not under) has no contraindications and instead has a long list of organic benefits, as long as the pyramid is built under the standards established by the Scientific Team Osiris.

So you can sleep every night or live your whole life inside a pyramid (the longer, the better), in specific treatments, there is another advantage of equal importance, which is the absence of therapeutic incompatibilities, with the exceptions of some drugs (Alcohol, psychotropic, morphine, and designed drugs) as well as decreased response to treatment with the use of corticosteroids.

Cardiac patients have no problem sleeping inside a pyramid (not under). There are already heart patients sleeping and living in pyramids for many years. Some have had such improvement that they stop the medication. The consumption of medicines, in general, has no contraindication in the pyramid itself, except that the last medication (in the case of psychotropics) should be taken two hours before bedtime. People who live in pyramidal homes (or sleep in pyramids) rarely need medication.

Ankle sprains are somewhat like a temporary rheumatic condition of traumatic etiology and rapid evolution. Patients usually remain between two and three weeks in plaster (cast) and often, the other foot is strained by overload during convalescence. Pyramidotherapy allows the patient to recover in two days, or three in severe cases, so pyramidal therapy is being applied in elite athletes.

Some cases of incipient rheumatism have ended in a few sessions, that seems impossible, given the inability of any other therapeutic modality to these ailments, but the reality is that since 1984 there are people who cure rheumatism using pyramids and since 1995 has begun a massively use of pyramid therapy in Cuba, which is now official throughout the country.

>>> Piramidal Therapy is official in Cuba

The greatest challenge of the scientists involved in these discoveries about the power of the pyramids is certainly alien to the settled scientific question solved. In just over three decades, we have been able to find out enough to provide prevention and effective cure against rheumatic diseases. But we do not know how many decades later people will be able to receive this information massively. How much do they have to suffer to make their minds open to comprehension?

For now, hundreds of people around the world are enjoying better health thanks to the pyramids, and soon there will be several thousand. In any case, people healed with pyramids, both rheumatic and other ailments, they are significantly more than the false skeptics and the cynics who swarm in the mass media and academic circles.

For most cases of rheumatism, the fastest and most effective cure, with less intense healing crises, is performed within the pyramid Hercules "closed" (not hermetically, does not cause overwhelm or claustrophobia). It is about four times more potent than a normal Pyramidbed.