READ THIS ARTICLE IF YOU WAIT FOR A KIDNEY DONOR 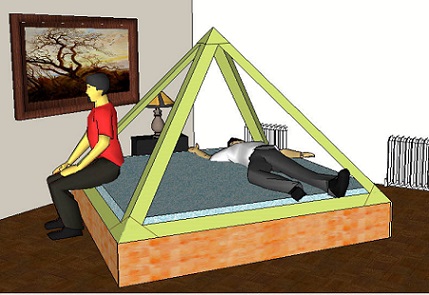 There are numerous cases of people with severe kidney problems, from nephritis due to biological causes to operable lithiasis (kidney stones), completely overcoming the ailment using our products. But we will expose only the most shocking for us, an unofficial case of a patient - already fully recovered -, who suffered from kidney problems that worsened to the point that she spent two years on hemodialysis treatment. A relative was compatible to be a donor and ADS received a kidney transplant. A few months later, She was overwhelmed with medications that prevent rejection (immunosuppressants), so with the atrophied immune system, she had to take large amount of antibiotics so flu or any small bacterial infection would not kill her.

Her possibilities of life were very scarce, due to the general organic deterioration. The medications (both immunosuppressants and antibiotics) damaged her stomach, despite the stomach protectors she was taking. It was counterproductive in the functions of her "new kidney," she was also seriously affecting her liver, for which she had to take more medications. So one medication required others to alleviate effects in a chain that was being unsustainable, leading to a DOM (Multiple Organic Dysfunction). Many of the drugs not covered by social security, so the economy of her entire family also collapsed.

In 2002 we installed a pyramid thinking that at least it would make antibiotics unnecessary, thanks to its infallible bacteriostatic effect. So if we cut that problem, she wouldn't need to continue with the stomach protectors either and possibly the immunosuppressants would be enough to sustain. The day we installed her Pyramidbed (with several aesthetic defects, because then we were only interested in the functioning), we could see an entire pharmacy in her closet, more than twenty medications, for only one person. We were very sorry. We clarified that we weren't sure of anything, that we could only guarantee the antibacterial effect, as well as the rheumatic and degenerative ones in which we already had many experiences and all successfully. But a case of a post-operative grafted kidney was something very different. We also warned her that we didn't know how the pyramid could affect the kidneys, that it could stimulate her immune system, producing an antagonism with the immunosuppressants, causing a fatal rejection. Her response was blunt: "The pyramid is all I have left to try because yesterday the doctor told me that as I am, my chances of life are minimal."

She asked us for total discretion of her case and wanted someone to pick up the pyramid from our workshop because she didn't want to give us a phone number, name, address or any other information than the description of her status. We talked for a long time using her phone in "hidden number" mode, but I had to convince her that we should personally install the pyramid, make sure it works, for better or worse. She agreed to give us only the address, and we went to her house on the agreed day. She asked us not to call her to follow up because she wouldn't give us any information.

However, two months later, she called to ask if it was normal to feel kidney pain using the pyramid, those who were supposedly dead (and luckily they hadn't removed them). After asking her about her condition, she only told me that she was much better, that had decreased the use of antibiotics and other drugs, but she had arguments with family about the "madness of going to sleep in a pyramid." I couldn't know on that occasion what the doctors said, but I told her that possibly the pyramid was reactivating her kidneys, clarifying that it was only a theory. I recommended going to another country to have urine and blood tests, the most complete possible. And after that, go to another clinic, also abroad, to have X-rays, a general check-up, etc. Even if it were expensive, it would be safer and more impartial.
After a few more months, she called me to ask if the pyramid could be useful in another problem of a relative, she was hesitant to give me information about her, so after a long talk, told me that she was much better, more than good, that her three kidneys worked perfectly and that the pyramid had changed her life. Still, she feared her case would be made public. By explaining our points of view and guaranteeing the most strict and inviolable privacy policy that we had been applying and that will never change, she was encouraged to tell me more details.

We can't count on her testimony with data and analysis comparisons for two reasons that she presented to us with clarity: The first is that she fears doctors because even though they "saved her life," when she commented on the alternative therapies and asked if pyramids had any foundation, she noticed very hostile attitudes, both towards the subject and towards herself. Her relatives don't want to return the kidney, joking a lot about it, but don't want to appear in the news as "weirdoes." The second issue is that she claims a state pay that would lose if it appears to be cured of her problem.

With that pay, they are alleviating the economic disaster caused by two years of treatment and dialysis (which the State paid in part but not all), analysis and therapies that didn't cover social security and then a transplant operation that almost left them on the street. Many years will pass, before that miserable disability pay back the spent on such a deficient medicine, but that's the way it is.

We know that kidney transplants (or any transplant) save thousands of lives each year, but we also know that most could be avoided by just sleeping in a properly constructed and installed pyramid.

A good part of these transplants are done through an illegal market, many times unethical in everything. Although there are not thousands treated with pyramids for kidney conditions, at least there are enough cases of surgery avoided in patients diagnosed with lithiasis, bacterial and or functional etiology nephritis, ensuring not only positive results achieved in many ways but with no inconvenience in the case of transplanted organs, and the post-operative ones much safer.

Another less spectacular case, where the patient had their kidneys removed, gave the same result. In a few months, the rejection symptoms disappeared, and the doctors themselves suspended all the medication. So to the doctors who read this, we recommend not to perform the nephrectomy, because although it is only one case so far, it's a "one to zero" against total dysfunctionality from the orthodox point of view (and even more against the medical criteria -merchants.)

The Perfect Pyramid eliminates the risk of infection, so even in the case of acute infectious nephritis (unless there is no time to prepare a pyramid), the nephrectomy can be avoided, giving the possibility to a total recovery of the kidneys. It would be lengthy to detail in this article the action of the pyramid as a general homeostatic regulator, not only for the most directly known effects of the pyramid (antioxidant, bacteriostatic, antilithic, etc.) but also for its ability - background effect - to restructure molecules and not just water. In the case of the kidneys, partial homeostasis (in this case, molecular homeostasis) is regulated both directly (by molecular restructuring itself), and by its regulatory incidence in the endocrine system.

Anyway, we end up here this article to not fully enter into what would lead us to orthomolecular medicine and quantum medicine. Pyramid therapy is, in this case, almost a Panacea, which we first discovered by the empirical, but then we investigated in physics and chemistry, finding out that it's also a perfect and sustainable form (without risk for integral or partial homeostasis) of biomagnetism or biomagnetic pair. A simple, risk-free therapy that encompasses an infinite number of medical and other applications, relatively inexpensive, although for the moment Social Security doesn't subsidize it in capitalist states. Hospitals very soon, or at least their beds, will be pyramidal, but current users will rarely have to be in a hospital, except in cases of an accident.

In Cuba, almost all hospitals in the country use pyramids only in their antipyramid form (under it) because making them large with the impure aluminum they have is risky to stay inside for many hours. Ours, on the other hand, have this guarantee.